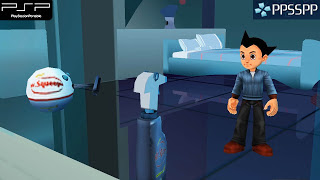 The game allows the player to be Astro Boy, utilising his array of weapons while fighting robot armies. The game features levels set on the ground, in which Astro fights while advancing by walking, and also in the air, which mainly includes Astro shooting airborne enemies down using his finger laser, reminiscent of Omega Factor’s gameplay in a 2D platformer format. Collectables include different costumes and also power-ups found in difficult-to-reach or hidden areas. While attacking, alongside his normal attacks, a player may wish to activate a 'Special Attack', provided they have enough energy to do so. A meter limits the amount of Special Attacks a player can use, being Arm Cannon, Butt Machine Guns and also Absorb (which allows the player to recharge a certain portion of their health). 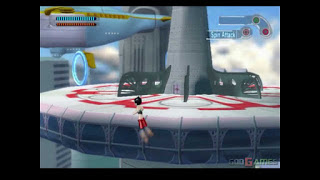 It features both a single-player mode as well as a multiplayer mode, with the second player being another Astro in an alternate costume. During Story Mode, if a player loses a life while the other is still playing he or she would, after a certain period of time, be able to re-join the game with full health. However, if both players lose lives that the same time, the game is lost. A separate mode allows both players to fight in the robot games ring, and the player with the most points at the end wins.

The game offers numerous unlockable and collectable elements that include exclusive art work, different versions of Astro Boy and more, as players live the story solo or side by side with a friend in 2-player co-op mode on the Wii and PlayStation 2 versions.