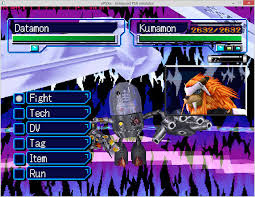 The game is a versus battle game, where one of the Human Spirit Digimon fights the other. Unlike most fighting games, the winner is not determined by having the most health, but the most blue or red "D-Spirits", which are released whenever the player strikes his/her opponent. When you've damaged your opponent enough to fill the gauge at the top, the character's Beast Spirit is activated whenever he/she attacks, allowing them to temporarily digivolve to a higher level, and attack with greater force. Also, yellow diamonds are released during Beast Spirit attacks, and filling the diamond gauge enables the player to momentarily warp digivolve to Ancient Level and fire a powerful attack, before returning to normal (this depletes the diamond gauge to zero). Once all of the Human Spirit Digimon are defeated, the player must then defeat Cherubimon. Cherubimon's name is Kerpymon in this game.

There is also a mini-game, where Digimon are used like marbles, and are fired at other Digimon on the board to knock them out of the arena. 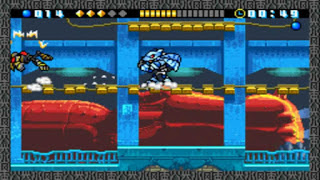 The plot echoes that of Digimon Frontier; several children receive messages on their cell phones asking them if they want their lives to change. Some answer yes, some answer no. Five who answer yes are summoned to the Digital World where they receive the ability to become Digimon and fight to end Cherubimon's reign of terror.