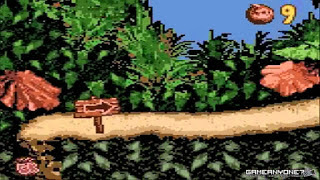 Donkey Kong Country is a side-scrolling platform game in which the player must complete 40 levels to recover the Kongs' banana hoard, which has been stolen by the crocodilian Kremlings. The game features both single-player and multiplayer game modes. In single-player, the player controls one of two characters: the gorilla Donkey Kong or his chimpanzee nephew Diddy Kong, switching between the two as necessary. Both characters offer different attributes: Donkey is stronger and can defeat enemies more easily, whilst Diddy moves faster and is more agile. Both playable Kongs can walk, run, jump, pick up, roll, and throw certain objects, while Donkey can slap the terrain to defeat enemies or find items.

The player navigates through the game via two game screens: the overworld map and a side-scrolling playfield which comprises the majority of the game. The overworld map displays an overhead representation of Donkey Kong Island and provides access to levels. Each level on the map is marked with an icon: unfinished levels are marked by Kremlings, whilst completed areas are marked by Donkey or Diddy. The overworld also grants the player the opportunity to visit other members of the Kong family: Funky Kong operates flight services which allows the player to travel back and forth between different areas of the game, jumping in Candy Kong's "save barrels" gives the player the chance to save their progress, and encountering Cranky Kong in his cabins will initiate conversations with him.

The majority of the game takes place in linear levels, populated with various obstacles and enemies, which mostly involve the player traversing the stages by running, jumping, or defeating enemies by jumping on their heads or rolling into them. The player is given a number of lives, which are lost if both Donkey and Diddy comes into contact with an enemy or fall into bottomless pits. The game ends when the player runs out of lives, although the player may continue their game from the most recent save point. Some levels feature unique mechanics such as riding in mine carts, launching out of barrel cannons, or swinging from vine to vine. Each level features various items for the player to collect; these include bananas, golden letters that spell out K–O–N–G, extra life balloons, and golden animal tokens that lead to bonus stages. Collecting 100 bananas and all four K-O-N-G letters will give the player an extra life respectively. There are also secret paths that lead to bonus games where the player can earn additional lives or other items, as well as gain possible shortcuts through the level.

In certain levels, the player can gain assistance from the Kong's "animal buddies" found by breaking open crates. Animals provide boons such as extra speed or jump height. Each animal can be found in an appropriately themed level: for example, Enguarde, a swordfish that can defeat enemies with its bill, can only be found underwater, while Squawks, a parrot that carries a lantern, is found in one cave level. The player can use the animal for the entirety of the level unless they are hit by an enemy. If the player is hit by an enemy without an animal, the leading Kong runs off, and the player takes control of the other. They will only be able to control that Kong unless they free the other Kong from a barrel. If the player is hit with only one Kong, they lose a life, and if the player loses all lives they receive a game over. 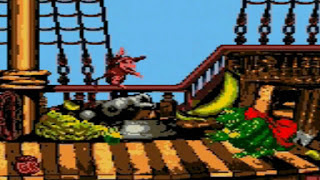 Each section of the map has one boss at the end, which must be defeated to travel back to the main map screen of the whole island. It is possible to access previous world maps without defeating the boss by finding Funky Kong and borrowing his barrel plane. Players use this ability to select the world from the main screen, then the level within it. Other friendly Kongs appear throughout the world map: Cranky Kong provides tips and fourth wall-breaking humour, whilst Candy Kong saves the player's progress. Multiplayer modes include the competitive "Contest" mode or the cooperative "Team" mode. In Contest, each player controls a different set of Kongs and take turns playing each level as quickly as possible; the objective is to complete the most levels in the fastest time. In Team mode, each player takes the role of one of the two Kongs and play as a tag team.