The game had to be adapted to the Game Boy Advance's hardware limitations. As a result, it does not have animated cutscenes, nor does it have Grand Theft Auto III's much-lauded pedestrian dialogue. All cutscenes are text-only with hand-drawn pictures of the characters' faces, with a thematic backdrop behind. The art style is consistent with that used for the cover and loading art of the three-dimensional releases in the series. Replacing the pedestrian dialogue, some soundbites taken from Grand Theft Auto III are played when the player hits someone's car. Short police radio voiceovers will announce the player's location and vehicle type when the player commits a crime. 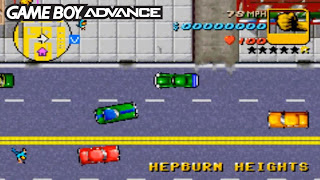