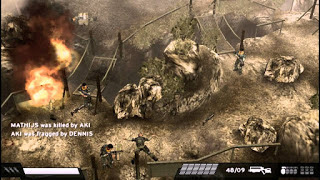 This game features a top-down isometric view in contrast to the original Killzone game for the PS2, which was a first-person shooter. The resultant game can be seen as a mixture of a shooter and a dungeon crawler.

The player can only control Jan Templar, although he can board and control several vehicles: heavy machine gun turrets, a tank, a hovercraft and a jetpack. During some levels a 'buddy' can be ordered around (although some are unarmed). These 'buddies' are normally teammates (Rico and Luger) or people that have to be rescued (the three VIP's in the third mission, first chapter and Evelyn in the third mission, fourth chapter).

By collecting various pickups in the form of money cases, the player unlocks new weapons to use in the game. These weapons can be found in various weapons caches in certain levels. After enough money is amassed, the V2 upgraded weapons become available. The weapons in the caches are also converted into the V2 upgraded versions. The unlockable weapons are: The ISA Assault Rifle, Helghast Assault Rifle, a Helghast machine pistol, a Helghast sniper rifle, an ISA shotgun, a Helghast revolver, an ISA crossbow and a Helghast chaingun (the ISA assault rifle is the default weapon). After downloading chapter five updates for the ISA flamethrower and Helghast rocket launcher are available to unlock. 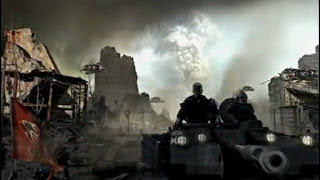 The player can also unlock upgrades to Templar's abilities by completing challenge games within certain limits (such as shooting X number of targets without shooting the 'civilian' targets). These are ranked in bronze, silver and gold. Upgrades come in the form of carrying more items, hitting harder in close quarters combat, performing actions faster, unlimited ammunition or upgraded health.