Legend Of Zelda, The Minish Cap 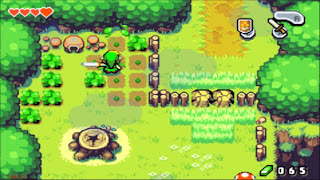 The Minish Cap retains the general gameplay features that were present in previous Zelda installments. The main protagonist, Link, must navigate several dungeons to obtain an item or enhancement at the end of each dungeon that is pivotal towards the quest. Each of the game's "bosses" are defeated using the item acquired in the boss's dungeon. The game also includes multiple "side quests"—optional tasks that are not part of the main quest but offer rewards for completion that are beneficial to the player. Recurring characters in the Zelda series make appearances and some form part of side quests; for example, Tingle and his brothers must all be contacted by the player to earn a reward.

A gameplay mechanic original to Minish Cap is the ability for Link to transform into "Minish size" by using one of the many "Minish portals" scattered across Hyrule. While in Minish size, Link is the size of the tiny Minish race. This changes perspective on the way the player can interact with the world, and requires them to shift from Minish size to human size in order to navigate the environment, avoid obstacles, and solve puzzles. For example, to "Minish Link" squares of tall grass are giant walls, and shallow puddles are giant lakes, whereas small structures are entire temples and cracks in the ground that "Human Link" can only walk over are holes that "Minish Link" can drop down. Enemies that would otherwise be easy to defeat also become dangerous "giant" counterparts, such as a regular ChuChu, which is the boss of the first dungeon and is fought while Link is in Minish size. The game's overworld is a map of the kingdom of Hyrule, and at its center is "Hyrule Town". The town acts as the player's main "safe space" from the monster-infested overworld, allowing them to collect rupees, gather equipment, play games at entertainment establishments to gain prizes, begin and progress side-quests, and interact with the citizens. Throughout the game's various story and side quests, Hyrule Town is also utilized as an on-and-off "dungeon" of sorts that Link must navigate interchangeably in his human and Minish size. 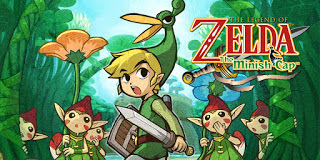 The Minish Cap features a number of enhancements that benefit from the more powerful Game Boy Advance platform. The game's camera angle is much closer to the ground, allowing more detail. In the overworld and in dungeons, the game replaces the traditional item interface of the handheld Zelda games with pictures associating items or actions with buttons, similar to the item interface in 3D titles like Ocarina of Time and The Wind Waker. Enemies include familiar creatures from the Zelda universe. Link can also perform special actions present in the 3D Zelda games, such as rolling while running. Along with returning items such as Bombs, Arrows and Pegasus Boots, The Minish Cap introduces three new items: the Mole Mitts, the Gust Jar, and the Cane of Pacci. The Mole Mitts allow Link to dig through dirt barriers to explore new areas, the Gust Jar can suck in nearby items and substances and can be used to suck up certain enemies and fire them as projectiles, and the Cane of Pacci can flip certain objects over and allow Link to launch himself out of holes in the ground. The game advances the combat system from previous handheld installments by allowing Link to learn new sword techniques throughout the game, some of which are techniques from previous games and some of which are new. As the game progresses, Link will collect Elements that fuse with his sword, allowing him to make copies of himself using glowing floor panels, used to solve puzzles such as pushing large blocks or hitting multiple switches simultaneously.