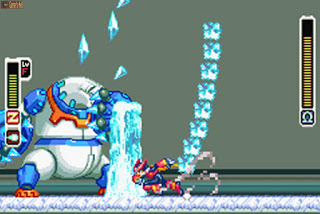 The fourth installment of the Mega Man Zero series introduces gameplay changes, but does not deviate from the platforming of its predecessors. Players guide Zero through eight main selectable stages, which are usually separated into two parts by a mini-boss battle. At the end of each level, the player faces one of the game's reploid antagonists.

Mega Man Zero 4 includes a new Easy Mode, not found in its prequels, in response to criticisms that the Mega Man Zero series had become too challenging. In Easy Mode, Zero receives a large life boost and can use the Cyber Elf without restrictions. However, Easy Mode prevents the changing of the weather, and consequentially the acquiring of EX Skills.

Zero is still equipped with the Buster Shot and Z-Saber at default. However, in place of the Shield Boomerang and the rod-type weapon from the previous games (i.e.: Triple Rod, Chain Rod and Recoil Rod) is the new Z-Knuckle. This device allows Zero to perform several actions, including hanging from pipes, destroying obstacles, stealing an enemy's weapon (if Zero destroys it using the Z-Knuckle) and acquiring special weapons in certain parts of a stage.

Another new element is the weather system, which allows players to choose between two weather conditions for each of the eight main stages. The difficulty of the stage varies depending on the chosen weather condition, with the stage being harder if the weather icon has an orange border around it. Sometimes, there are secret passages in some stages which the player can only reach by setting the weather to "hard". The trade-off for an easier level is that Zero cannot learn an EX Skill from a boss.

Cyber Elves, a core element of previous Mega Man Zero installments, are small helpers who can assist Zero in combat. Shortly after the introductory levels, a Cyber Elf will arrive for Zero to equip. This elf has most of the powers of Cyber Elves from previous games, which are unlocked as the player raises its level by feeding it E-Crystals. Zero may select one power from each of three categories: Nurse, Animal, and Hacker. The player's ranking at the end of a level is no longer given a penalty for using the Cyber Elves as long as they are kept under the maximum power limit. In addition to this, Zero can now equip body chips to enhance his abilities, including double-jumping and self-recovery, similar to early Mega Man X titles. 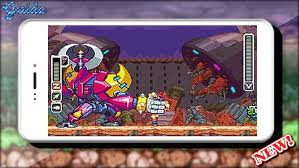 Zero cannot rely on finding secret disks to give him enhancements as in Mega Man Zero 3. Instead, players must collect parts dropped randomly from defeated enemies. Recipes for combining these parts can be obtained from NPCs the player rescues or a Cyber Elf after its stages of evolution. However, the majority of the recipes are found through experimentation with combinations of parts.

Another distinguishing feature of this installment is that Neige and Ciel have different faces depending on their emotion. For instance, after Zero "dies", Ciel is sitting near a tree and tells a promise that saddens her and brightens her. Neige also has an angry face, one that Ciel lacks.