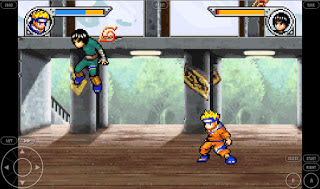 Naruto: Ninja Council 2 is side-scroller game in which the player has to advance through a 2D level while fighting enemy ninja. The levels vary from the original anime locals like Akagahara and the third exam stadium to some new settings like a cave system. The player is able to double-jump and teleport up and sideways to get to places that are normally out of reach. The game also features special levels in which the character's speed doubles and is asked to run through the whole level while collecting leaf symbols in a specific time. The playable characters are Naruto Uzumaki, Sasuke Uchiha and Sakura Haruno, and it is also possible to unlock Rock Lee. The player is able to swap between characters using the left trigger, and each one has a separate life bar, however when a health package is picked up by one character, it affects the whole party. In certain points of the game however, the player is not able to switch between one or two of the characters, which results in a higher difficulty level. 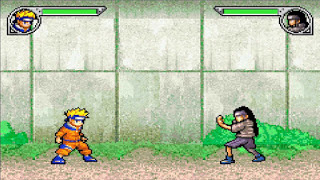 Combat is performed by using the attack button continuously. Jutsus can be performed by a simple combination of movement and attack buttons. Each character (Besides Lee) has three sets of Jutsus: Naruto can use his sexy jutsu, summoning jutsu and "Uzumaki Barrage". Sasuke is able to use his Sharingan (写輪眼, lit. "Copy Wheel Eye", English manga: "Mirror Wheel Eye"), "Lion Barrage" and Chidori (千鳥, lit. "One Thousand Birds"). Sakura's jutsus are Speed boost, "Chaa!!" Barrage and timed "Chaa!!" Barrage. Ninja tools can also be acquired, and they are thrown using the attack button. Using scrolls that are scattered throughout the levels will result in one of the anime characters to appear and perform one of his Jutsus.