Home » PSP » Need For Speed Carbon - Own The City

Need For Speed Carbon - Own The City 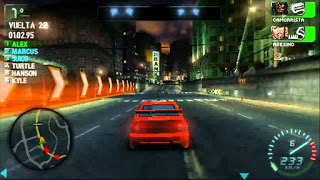 In the game, players take part in illegal street races that focus on different styles of races, utilizing a variety of licensed real-world cars (available at the time of the game's development and release) that can be upgraded and customized with new parts, while contending with the involvement of the police in their efforts to impede the player. Racing Events focus on competitive races with other drivers on circuits or point-to-point routes, checkpoint races, and races involving sprints or drifting (the latter being absent in its predecessor), with players able to use Nitrous Oxide and Speedbreaker whenever needed - either to help win races or get out of tight spots - both of which recharge over time. The game itself features four game modes - Career, Quick Race, Challenge Series, and Multiplayer - with the latter featuring online gameplay available in all console and PC versions of the game, except the Wii's edition.

The game operates on the same gameplay mechanics used in previous entries in the series, including its predecessor Most Wanted, though Carbon introduced new elements. A new element exclusive to Carbon are Canyon events - special racing events styled after Japanese Tōge racing, in which player compete in competitive racing on canyon roads outside the game's main setting. These events consist of sprints, drifting and duel events, in which the latter two feature a majority of destructible guardrails that the player must avoid crashing through or risk losing these respective events as a result. Duel events on these circuits operate differently to events involving major rival racers in Need for Speed games, as these are conducted across two stages on a canyon circuit - in each stage, one driver acts as the chaser and pursues the other at close proximity, with the first stage seeing the player as the chaser and scoring points the closer they can tail their opponent, while in the second stage their opponent becomes the chaser and the player must keep as much distance as possible to avoid losing too many points before the stage is completed. At the end of both stages the car who took the lead wins if their score is positive, otherwise their opponent wins if they turned it negative. Apart from scores, an instant win is possible depending on which mode the Duel is conducted in - in Career mode, the player can win instantly if they can stay ahead of their opponent for ten seconds, but lose if they fall behind for too long; in Online Multiplayer, a player wins if their opponent crashes through a guardrail.

Police pursuits, a staple of the series, function similar to Most Wanted in that police can turn up at any time during a race and attempt to impede the player during the event, except in Canyon Race events and checkpoint races; in Career mode, the police can also turn up during Free Roam, but will not act against the player unless they have a warrant (for evading a previous pursuit) or committed an offence in their sight, whereupon they focus on blocking in and arresting the player unless they can lose them and find a safe spot to hide until they lose their heat. As the player is pursued, they can either attempt to evade the cops, or knock them out of action by ramming their cars or using destructible props called Pursuit Breakers to impede their pursuit, though extensive pursuits will cause the player's heat level to rise, leading to stronger pursuit tactics including spike-strips, road blocks, and the involvement of state/federal authorities. Carbon modified the pursuit function by making police less dominant in arrest tactics at higher heat levels, and reducing the chance a Pursuit Breaker blocks/destroys a pursuing vehicle. 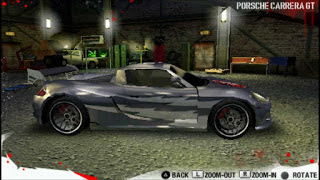 Licensed real-world cars used in the game are divided into three tiers (performance level) and three classes - Exotic, Tuner, and Muscle. For example, a Nissan 240SX is a tier 1 tuner car, while a Corvette Z06 is a tier 3 muscle car. Cars receive visual damage during the game, but no physical damage. Cars can be upgraded in performance through new components and fine-tuning of each component - such upgrades can help, for example, to improve speed, or improve braking. Carbon added the ability to customize visual parts via autosculpt parts, which allow adjustments of components for example, while adding flexibility with vinyls and decals by allowing them to be placed in layers over each other, with the ability to modify these in shape and size, and place them anywhere on the car. Additional cars and customization parts can be acquired through completing Reward Cards - each card consists of a set of challenges for the player to complete across the game modes, and reward the player either with a new vehicle to use or new parts for customization.