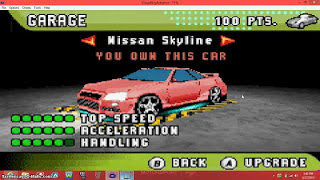 In addition to the racing modes included in the previous Underground game (Circuit, Sprint, Drag and Drift races), four new variations of races have been provided in Underground 2. One racing mode was dropped, this being the Knockout competitions. Still, a Lap Knockout option is available when racing Circuit in non-career races.

Underground 2 is unique among the games in the Need for Speed series in that it requires a player to drive to a certain place in the city in order to begin a race (other games allow the player to select a race from a menu). Most races are marked on the in-game radar, but some are hidden and the player must search for them, should he/she decide to play them.

Once any stage is completed, all of the race location icons for that stage are removed from the map and a new set of race location icons are placed on the map for the next stage. While in the garage, there is a "World Map" feature that includes a menu of races for all prior stages, with the menu noting which races have been completed or not completed, and the player can select any race from any prior stage to run from the menu. After completing stage 2 through stage 5 (stage 5 is the last stage of career mode), there will always be 8 sponsor races that will not be completed, since a player has to choose a single sponsor per stage and can only run 3 out of 11 unique sponsor races, leaving 8 sponsor races not completed at the end of each stage. These can only be run using World Map. Due to a game bug (at least on PC version), if running a non completed race from the World Map, no credit (cash or rep) will be awarded unless the player uses restart at least one time during the race. The restart can be done as soon as the race starts in order to get credit for the win.

Street X mode is similar to circuit races, except that they take place in closed and tight tracks. A maximum of 4 racers participate in this event. This mode disables the use of nitrous oxide. Street X uses the same arena used in Underground 1 for Drift Races.

Drifting is one of the easier types of racing (depending on difficulty level) in Underground 2. On the "parkade" tracks, the player drifts with up to 3 (if online, always 3 if offline) other competitors at the same time on the parkade tracks. Points are awarded when the player successfully slides the car and finishes each drift without hitting any walls or traffic. Like the Street X mode, no nitrous oxide is allowed. There are also downhill drift events where the player drifts the car while progressing down the course from top to bottom. In the downhill drifts, there are no other racers, but there is normal city traffic. Players increase their points by sliding past city cars. The downhill drift events may have been inspired by Initial D.

Drag racing is a point-to-point race that forces a player to use a manual transmission. Steering in this mode is simplified to simply allow for lane changes, while the game handles the steering along the lanes, and the player focuses more on maintaining an optimum speed for the car. The Nitrous Oxide meter is enlarged and displayed on the left side of the screen.

The Underground Racing League (URL) is a set of tournaments which takes place in a specific set of closed tracks outside city streets - either actual racing circuits or airport runways. URL tournaments typically consist of one to three races, with up to six cars (both in career mode and online). In tournaments with two or more races, a points system is used. At the end of each race, drivers receive a specific number of points according to their standing in a race. The total score at the end of these races determines the winner of the tournament. The Bayview Circuit where the URL Races held is based on Sepang Circuit.

Special events - these are similar to sprints without any barriers, with the goal to reach a target point on the map (using the in game guide helps here), which is a "photographer", and the player needs to reach the target within a specific time limit. Achieving this will reward the player with a magazine cover. Ten of these special events are called "DVD" events, which get unlocked based on a cars visual rating, and stages 2 through 5 each require completing some number of "DVD" events to complete a stage. 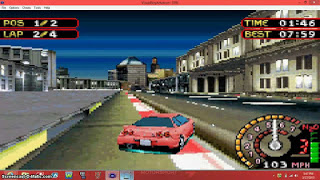 Outruns - while in free roam (cruising), the player can challenge specific opponent cars (an outrun opponent car will have bright tail lights, similar to the player's cars when they use nitrous oxide) in an "outrun", where the goal is to start an outrun and then distance their car from the opponent's car by 300 metres (1,000 feet). The player can choose when to initiate an outrun, and can take any path and/or use tactics to achieve this goal, provided they are in the lead. Each stage, including the intro stage, has a limited number of outruns a player can win. For example, in the intro stage where the player is driving Rachel's car, 3 outruns can be won. After winning the number of outruns allowed for a stage, the outrun opponent cars cease to appear. After completing career, there is no limit to the number of outrun wins allowed. Depending on the stage, after winning some number of outruns, the player is rewarded with a unique part. Some stages allow a player to do a series of outrun sequences, rewarding the player with multiple unique parts (one for each series of outruns won). The outrun mode is similar to that of Tokyo Xtreme Racer and Wangan Midnight video games, which uses health bars instead of distance to determine the winner.

Cell phone / SMS system - During game play, the players will occasionally receive phone calls or text messages. The game maintains a list of messages and game info that can be reviewed via a menu system.

Cash and info icons - Each stage, including the intro stage, includes a set of hovering icons scattered throughout the game world. As the player explores the map in free roam, the player receives a cash reward and/or info as the player discovers and drives through each of the icons.