As with all Pokémon role-playing games released for handheld consoles, FireRed and LeafGreen are in a third-person, overhead perspective. The main screen is an overworld, in which the player navigates the protagonist. Here, a menu interface may be accessed, in which the player may configure his or her Pokémon, items, and gameplay settings. When the player encounters a wild Pokémon or is challenged by a trainer, the screen switches to a turn-based battle screen that displays the player's Pokémon and the engaged Pokémon. During a battle, the player may select a move for their Pokémon to perform, use an item, switch their active Pokémon, or attempt to flee. All Pokémon have hit points (HP); when a Pokémon's HP is reduced to zero, it faints and can no longer battle until it is revived. Once an opponents Pokémon faints, all of the player's Pokémon involved in the battle receive a certain amount of experience points (EXP). After accumulating enough EXP, a Pokémon will level up.

Capturing Pokémon is another essential element of the gameplay. During a battle with a wild Pokémon, the player may throw a Poké Ball at it. If the Pokémon is successfully caught, it will come under the ownership of the player. Factors in the success rate of capture include the HP of the target Pokémon and the type of Poké Ball used: the lower the target's HP and the stronger the Poké Ball, the higher the success rate of capture.

While FireRed and LeafGreen are remakes of Red and Green (Pokémon Green was only released in Japan, whereas the international variant was Blue), they contain usability enhancements such as a contextual tutorial feature which allows players to look up data at any point in the game. Additionally, when continuing a saved game, players are shown the last four actions they performed, aiding in remembering what they were previously doing. 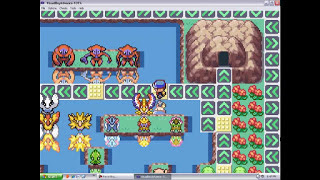 The games support the Game Boy Advance Game Link Cable, through which connected players may trade or battle. Players may also connect with Pokémon Ruby and Sapphire, as well as with Pokémon Colosseum, allowing them to obtain over 350 Pokémon. FireRed and LeafGreen also have the ability to connect to the GameCube and interact with Pokémon Box: Ruby and Sapphire. In Pokémon Box, the player may organize and view their collected Pokémon, and in Colosseum, Pokémon may be used in battle. FireRed and LeafGreen are also the first games in the series to be compatible with the Game Boy Advance Wireless Adapter, which comes prepackaged with the games. The adapter can be plugged into the link port of the Game Boy Advance system and allows players within a radius of 30–50 feet (9.1–15.2 m) to wirelessly interact with each other. In addition, as many as 30 players at a time may join a special location called the "Union Room", where they can trade, battle, or chat. Nintendo set up "JoySpots" at Japanese retail locations for this purpose.