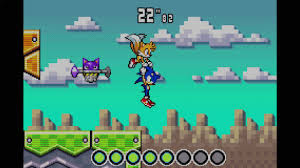 Sonic Advance is a side-scrolling platformer action game reminiscent of the original Sonic the Hedgehog games released for the Sega Genesis. Players journey through an island to defeat Doctor Eggman, who is attempting to capture its animal population to turn them into evil robots. Players select one of four characters, each with their own unique set of moves. Sonic the Hedgehog is fastest and can perform an "insta-shield" that protects him for a moment; Tails can fly or swim for a short time; Knuckles the Echidna can glide through the air, swim above water for a few seconds and climb walls; and Amy Rose can destroy enemies using a hammer. Except for Amy, each character can defeat enemy robots by jumping and curling into a ball, or by performing a spin dash on the ground to gain speed. By entering a cheat code, players can control Sonic while Tails runs alongside him, similar to Sonic the Hedgehog 2 (1992).

The game takes place over six levels called zones. Each zone is split into two acts, where the player must guide their selected character past enemies and obstacles such as spikes and bottomless pits to reach the end in under ten minutes. Scattered around acts are springboards, boost pads, and golden rings, which serve as a form of health; players survive hits as long as they have at least one ring, but their rings will scatter and disappear after a short period. Players collect canisters that contain power-ups such as speed shoes, elemental shields, and invincibility. The first act ends when players pass a signpost, and the second culminates in a boss fight with Eggman; after hitting him eight times, Eggman will flee and drop a capsule of captured animals. Each character starts the game with a number of lives, which are lost when they are hit with no rings in their possession, crushed, drown, fall in a bottomless pit, or exceed an act's 10-minute limit. If all lives are lost, they will receive a game over. 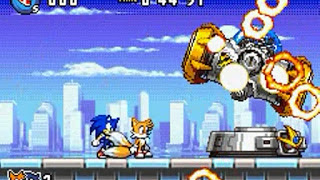 Special springs can be found near the top of certain acts. By jumping on them, the player can reach a special stage, where they are sent down a tube to collect rings. If they collect enough rings, the player receives a Chaos Emerald. Collecting all seven Emeralds unlocks an extra boss fight. The game also features a minigame, Tiny Chao Garden, where players can raise Chao. Players can transfer their Chao between the Tiny Chao Garden and the Chao Garden from the GameCube versions of Sonic Adventure and Sonic Adventure 2. The game also features a competitive multiplayer mode, where up to four owners of the game can race to the end of a level or search for Chao.