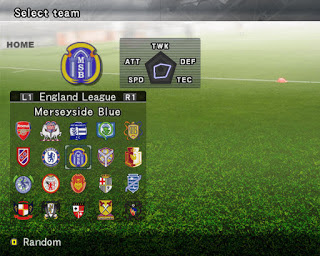 World Soccer: Winning Eleven 9 (Pro Evolution Soccer 5 in Europe) is a great game, and there's nothing surprising about that. What is surprising is that each year Konami deliver a game that appears to be so similar, yet feels so different to the game that preceded it. It may be as regular as clockwork, but it's no simple cash-in.
It's really rather pointless for me to gush about how brilliant Pro Evo 5 is to play, or go on for five paragraphs about how it once again plays a better game of football than FIFA. What's more important are the reasons why this is the best game in the series to date and just how it differs from the four games that have gone before it.
The biggest difference, and the area that you'll notice straight away, is in tackling. Pressuring your opponent by using the 'X' tackle ('A' on Xbox) has been a technique used by Pro Evo players for some years, and while not perfect, did exactly what you wanted it to do: put pressure on the opponent. Moments into Pro Evo 5 you'll realize that this 'holding X' mentality needs to be thrown out the window, in favor of a more restrained defensive approach. Pressing from behind will almost always result in a free-kick, so it's vital that you time your challenges and try and take the ball from in front of the opposing player.
Even though the ref is more likely to blow than in previous games, he also plays advantage in a far more realistic way. It's still not perfect, not by any means, but on the whole the attacking player will get the chance to continue if there is no reason to stop play. Offside decisions still seem a little too strict, with the referee's assistants using their hawk-like vision to spot a leg mere inches ahead of the last defender. You'll often be allowed to go on and score, only to realize it doesn't count moments later, but the strictness of decisions is definitely something that could be worked on. 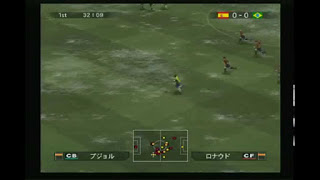 On the attacking front there's a new first-touch system (not quite as elaborate as FIFA's) and more realistic dribbling abilities. The first touch system allows you to take the ball with more control than in previous games, and now only the very best players can get past defenders. Pro Evo 4 allowed attackers to dribble past defenders far too frequently, and this change makes the game all the better. The side-step has also been moved solely to the d-pad, and no longer needs to be used in conjunction with a shoulder button. To revert back to traditional control when on the ball you have to hold the R2 button (or controller equivalent). This, along with numerous other small changes, takes some getting used to.
Shooting also feels improved over last year, with a more significant gap between skill levels and more control to the human player. Skilled players now have a 'Middle shoot' stat that allows them to rifle in bullets from just outside the penalty box, and a new 'placed' shot lets you direct your efforts with a little more accuracy. There's a definite advantage to getting skilled players on the ball in attacking positions, and this leads to more measured and planned attacks.
Minor changes have also been made to set-pieces. Throw-ins are now as they were in Pro Evo 3, which gives you more options, and free-kicks now let you play a measured short ball, using a power meter, as well as the standard lofted delivery. Scoring from crosses and corners also seems tougher than before, but seeing as may people built their entire attack around this in Pro Evo 4, the change is no bad thing. One area in which Pro Evo seems to struggle is the thru-ball. In Pro Evo 4 it felt a bit weak, and an attempt has been made to sort that out. Unfortunately, the thru-ball is now rather heavy. Prolonged play may make this easier to use, but I still don't think they've got it right.
On the surface the game looks eerily similar to Pro Evo 4, even including the slowdown in the PlayStation 2 version, but some improvements have been made. Animations have once again seen more additions, making the game look even better in motion. Star players also have increased likenesses, with faces that in many ways look more realistic to those seen in the latest FIFA game. There's still no widescreen support (which would be a great addition) and there's nothing flashy about the visuals, but it looks like real football during play, and that's all that matters. It's also nice to play a game that doesn't insist on using bloom lighting for no real reason.
There's still the issue of unlicensed teams, but how much this affects enjoyment will vary from person to person. A few teams, such as Chelsea, Arsenal, Celtic and Real Madrid are fully licensed, with real team strips, badges and players, but the majority are in likeness only. The quality of the emblems and kits varies from club to club and player names use the usual misspelling trick that makes them recognizable, but not 100 percent accurate. Suffice to say, if you want every last detail to be accurate, Pro Evo isn't for you.
Commentary still fails to match the authenticity of the visuals, often lagging behind play or totally misreading the situation. Crowd noise, on the other hand, sounds even better this year, with natural sounding reactions to on-pitch events really setting the tone. Menu music is as catchy as ever, and while not packing the licensed tracks found in FIFA, is more than up to the job. What would a Pro Evo game be without cheesy music anyway?
And the biggest addition has been left till last. All versions of the game now support online play, with up to four players (two per machine) able to play competitively. While perhaps not as good as the tournaments set up using Microsoft's short lived XSN for the Xbox, leagues can be arranged with relative ease and you can even take your Master League team online. Performance online also seems like an improvement over last year's game. Lag was far less frequent than in Pro Evo 4, but your experiences online will likely be determined by who you play against and the quality of their connection.