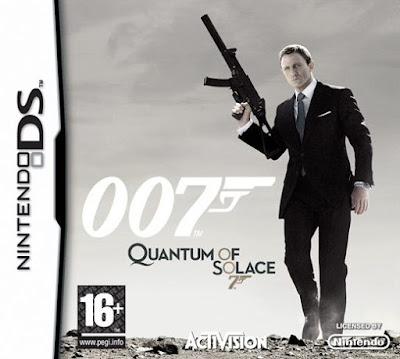 The game begins with James Bond kidnapping Mr. White, a member of the previously unknown criminal-terrorist organization Quantum. While he and M interrogate White, they are attacked by the traitorous MI6 agent Henry Mitchell, who is killed by Bond while White escapes. Later, Bond spies on a meeting of Quantum members and photographs them; among them is Dominic Greene, a well-known environmentalist.

The game jumps forward to Bond crashlanding in Bolivia, where Greene is trying to buy land. By this time, Bond has met Camille Montes who is seeking vengeance against General Medrano, who is trying to overthrow the Bolivian government. Bond learns that Medrano killed Camille's family, and this is why she wants revenge. Bond opens up to Camille about the death of his former love, recounting the events of Casino Royale. The player follows through the plot of Casino Royale, from Bond chasing Mollaka through Madagascar, Bond infiltrating the Science Center to kill Dimitrios, saving Skyfleet from Carlos, killing Bliss en route to Montenegro, meeting Vesper, saving Le Chiffre from Steven Obanno and his men, saving Vesper from Le Chiffre, and finally confronting Vesper and Gettler in Venice where Vesper dies, at which point it flashes back to the present.

Bond and Camille soon arrive at a hotel in the middle of the Bolivian desert. There, Greene and Medrano are discussing the land that Greene wants to buy; Greene will fund Medrano's attempt to overthrow the government in exchange for the land that he wants. Bond and Camille break up the meeting; Camille then kills Medrano while Bond kills Greene. During the fight, the hotel's fuel cells are ignited; Bond and Camille manage to escape from the hotel before it explodes. They leave the area in an MI6 helicopter. In the closing scene, it is revealed that Mr. White and Guy Haines are looking at MI6 debriefings and updates on 007's missions. The game ends with a short scene of Bond outside the house telling M that he's going in. In the post credit scene, Bond tells Tanner that the briefcase containing the Poker winnings is still missing and that they have been looking in the wrong place for it - ending the game on a unresolved cliffhanger. 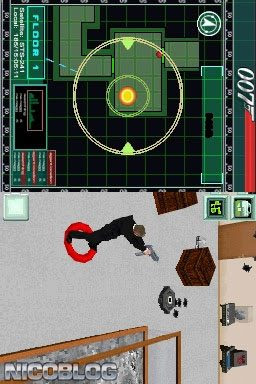 The DS version of the game is designed differently from its console counterparts. The game is played with the DS held sideways and is in the third person. Bond's movements are controlled by dragging the stylus around the touchscreen. Actions (such as firing a weapon) are performed by pressing icons on the touchscreen, while the DS's buttons are relegated to primarily initiating hand-to-hand combat. There are 6 weapons in this version. The storyline followed by the DS version is also different. The character of Camille is cut altogether, the opening mission at White's Estate is replaced by a training simulation at MI6 Headquarters and, after fighting street gangs in Bolivia, the final mission and boss fights against Greene and Mr. White take place at Guy Haines' Mansion (a deleted scene from the original ending of the film).